Like Oil and Water, or, You Can Lead A Horse To Water But You Can't Make Them Drink. 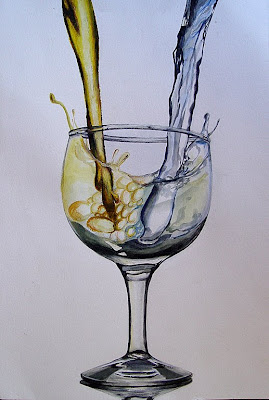 As I've shared with others my new perspective on attaining sustained happiness, those already dancing to the passion drummer continue to reinforce that I'm truly on the path to sustained and long-term happiness. I've been interested to see how many people I've talked to have shared with me the communication struggles they have with people on the other side. A co-worked told me of his difficulties communicating with his teenage daughter. He was marching to the goal-oriented drummer and his daughter is dancing to the passion drummer. My hair stylist told me of her difficulties with an older sister who is definitely marching to the goal-oriented drummer, while my stylist dances to the passion drummer. The list goes on.

The common pattern I see is that the goal-oriented folks tend to feel "in the right" and many like to impose their goal-oriented success-driven value system onto others that don't listen to the goal-oriented drummer. I used to be one of those people so I can say this with some certainty, and I more easily see those same traits in others, now that I'm on the other side.

The unfortunate result is that those people dancing to the passion drummer, being imposed upon by often judgmental (sometimes brutally so) goal-oriented marchers, often will retreat from communications. Since they don't chose to seek interactions that feel negative, they will avoid those individuals and the communications between the two individuals continue to degrade. The harder the goal-oriented person pushes, the less likely the passion-oriented person wants to be around them, because it simply isn't compatible with the way they view the world.

On the flip side, passion-oriented people are absolutely fine living with goal-oriented folks, not imposing their values on the goal marching folks. They are focused on passion so they don't feel compelled to control anything or anyone else. Yes, they tend to gravitate toward those that also have a focus on passion and often similar passion, but they do not push away non-passion folks, they don't judge them, and they are able to co-exist with them without any discomfort. As long as the goal-oriented people in their lives don't try to convert them to a goal and success (in the traditional sense of the world) driven world, things work out just fine.

The dynamics here are all one sided from my observations, except of course for me. Since I've crossed over, I've tried to figure out a way to help others that are also looking for sustained happiness and personal fulfillment, both with my blog writing and in-depth conversations with nearly everyone I meet (call it a passion ;) ). As I describe the cycle of marching to the goal-oriented drummer (feeling the ugly, troubleshooting, setting goal, working toward goal, achieving goal, enjoying success and short-lived happiness, rinse and repeat), so many of the people I've talked to (that said they are trying to find their passion/dream job and felt trapped in an unfulfilling job) said they could really identify with that cycle. But, when I try to explain the change in focus required to dance with the passion drummer, most of them completely check out. It's like flipping a switch. They don't want to hear it. It doesn't compute. That, or they, like I used to think, believe that dancing to the goal oriented drummer is hippy-dippy, or new-age, or too risky and open to chance.

Labels: 2009-The Year Of Happiness