I'm not sure what it is about this movie. I've heard more variety in responses regarding this movie than typical. I'd read some of the comic, but not the entire series and I absolutely loved it. Dark, racy, and fun. Of course the ending isn't exactly "satisfying", but that's exactly how it's intended IMHO. I've heard some even ragging on the movie before they'd even SEEN it. Yes, Jack, that would be you!

I understand that if you're not familiar with the comic, you won't have the same frame of reference and the movie will have a different (less?) effect on you. But even if you've read the comic series, the movie deviates in its ending (better than the comic from what I've heard from many fans of the comic series). Still I can't imagine not seeing this movie. It would be like living life without having seen Sin City or 300. That just doesn't seem right to me.

Another thing that doesn't seem right is people bringing their single-digit-aged kids to this movie. This is NOT your bubblegum and baseball cards type of comic. When we saw a lady sit down in the cinema with her 9 year old, we were both floored. This is definitely a hard R. Keep that in mind. Full male frontal nudity (mostly ala CG...or else, be still my palpatating heart!) in quantities I've frankly never really seen before in mainstream film, steamy scenes with Silk Spectre II as well as new and bloody uses for a hand-grinder round it off nicely for the adult intended audience.

And I just gotta say, I love Rorschach. Jackie Early Haley did an amazing job in this performacne. Rorschach rocked the house. My favorite quote of the movie (the whole theatre roared): "You don't get it. I'm not stuck in here with YOU! YOU'RE stuck in here with ME!!!"
Posted by Tracy Talbot at 3/11/2009 No comments: 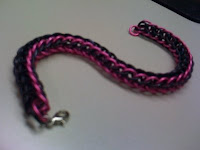 My hair stylist really liked my set of n00b chains that I showed her at my last appointment. She wished she could have a pink and black foxtail bracelet. So I made her one to give her at my next appointment. It was very fun to make and only took the length of a movie to complete. This is again using anodized aluminum jump rings purchased from The Ring Lords. I wish I knew where to get black (or pink) lobster claw clasps, but I completed the project with a silver clasp which looks "okay".

Next week I begin a class at Creative Side Jewelry Academy of Austin called "Fascinating Findings" taught by an amazing artist, Janise Simmons, in which I'll learn how to make my own custom clasps out of wire, so I'll just have to buy matching wire with my jump ring order for future projects. I can't wait!!
Posted by Tracy Talbot at 3/05/2009 No comments: