I love to decorate my home in unusual ways, particularly when it can save me money without looking like it. Case in point, our new entertainment center. My boyfriend bought a new TV (I'll address my love of home electronics at a later juncture), so I bought the entertainment center to hold it, as the new television was too big for the current TV stand. Actually what used to be on this wall of our living room was a painfully small TV/stand and an outdoor patio end table (no kidding) holding the AV Receiver, cable box, modem, wireless router, and Xbox 360. Let's just say it raised many a visitor's eyebrow. The TV wall is 16ft long and when I started pricing units that would fit that size and a 61" TV, I quickly determined that I was in the $5,000+ range which was not going to happen on my budget. Starting to think outside the box, I took a visit to IKEA. Did I happen to mention that I love IKEA?! 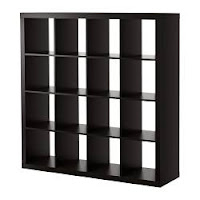 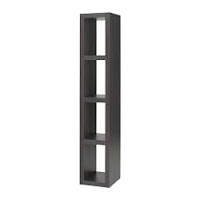 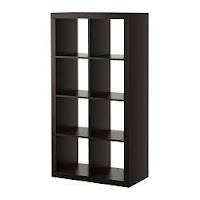 Take a look at these individual IKEA pieces. None solve my problem since I'm looking for a big screen entertainment center with a built-in feel. But wait! Stack them on their sides on top of one another and voila! It still wasn't exactly what I hoped because I wanted to surround that big new TV with a pier shelf extending across the top of the TV as depicted by the red box. 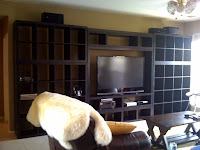 After about a week of mulling over possibilities, my friend Tom came up with the solution (Thanks, Tom!) using single plank shelves to frame the TV and hold up the pier shelf without drilling into any of the finished exteriors of the shelves (and the shelves are finished on all sides except for the single planks). The single planks were joined together using flat L brackets and just sits on the top of the base shelves holding the TV. Since none of the other pieces are attached to one another, I cut up a piece of silicone cookie sheet and placed the non-slip sections in between the different shelves. As you can see the before/after pics are pretty dramatic. But I'm not done yet! 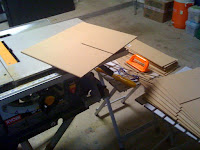 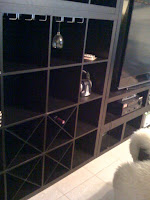 Since we're trying to furnish our new home, we wanted a liquor/wine cabinet and the entertainment center had more than enough room to accommodate this. First, I added a couple of under counter mount chrome stemware racks from Target. Then I made wine bottle rack inserts. I'd seen X shaped racks and they were very pricey so I made it myself. I used 3 pieces of 1/4" 2x4 Hardyboard from Home Depot. I cut them to fit the cubes on the diagonal, then cut halfway through them with a 1/4" cut (the thickness of the piece) so they'd slide together to create an X. I painted them and inserted them in the bottom shelves. They slide around a bit, but Tom suggested that I use some removable silicone adhesive and a caulk gun to adhere the inserts without ruining the shelving finish. I'll pick that up on my next trip to Lowe's or Home Depot. Turned out nice, didn't it? 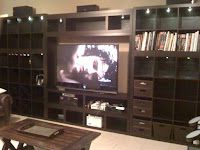 I didn't like the backless look (seeing the wall behind each shelf) so I made removable backs. Using painted 1/8" 4x8 hardboard cut down to fit the various shelving units, affixed to the backs of each shelf with self-adhesive Velcro strips. The great thing here is dealing with electrical cords. I don't have to drill any holes but instead simply pull away the backing for that particular shelf, pull the cord through and Velcro the backing in place again. I omitted a few interior shelves to fit the big components like the receiver. 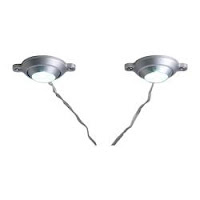 I installed IKEA under-cabinet lighting but it had a very Euro bluish cast that didn't fit with the warm Pottery Barn feel of the room. Worried the halogen lights would burn any sort of filter added to the lenses, I tried a Minwax wood stain pen and put a coat of stain on the lens of each light. It didn't burn off, and it gives the lighting a pleasing amber cast. They're self-adhesive and I used black electrical tape to hide the silver power cords. I'm still trying to find the remote that I'll use to control these lights.

I found some leather organizers that fit perfecting in these cubes to hold all the console game CDs, owners manuals the home theatre and gaming equipment, and gaming accessories. These are not inexpensive, so I'll pick up a few more when I can.

Here is the finished project. I am very happy with the results. Considering what this 16 ft unit looks like it cost, I'm thrilled how the itemized cost schedule posts. No one would ever guess it was less than 3 times this price. 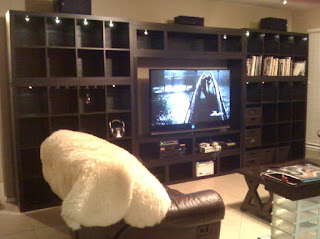