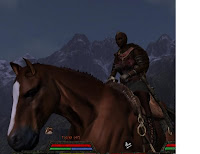 I've been playing MMORPGs with Jason for nearly 4 years now. Jason doesn't usually stick with any game for any lengthy amount of time, and, if he does, he creates new characters frequently because he's bored with them or doesn't like the class. So here I am having never experienced end-game content on a single MMORPG that I've played, while my mother has several maxed out characters in her favorite MMORPGS: EverQuest2.

It's looking like this may finally change however. We're still playing Age of Conan. Not only are we still playing, but we're still playing our original characters and tonight we hit the all time highest levels we've both ever achieved in game...47 (see Tazriel on her steed at level 47 at left). It's amazing really. In spite of the fact that AOC has some serious issues with having enough quest content to keep a single pair of players busy in the relevant zones without scratching their heads wondering where in the heck they're supposed to go NOW or if it's intended that you must group in larger groups or grind your way to the next level...yes, in spite of these tedious facts, we are loving are characters, feeling very compatible, love the art and game design, with enough balance between our classes that neither of us feels like the other is carrying us along, and we're effective while still having plenty of opportunities for challenge (aka we still die a lot). I am so excited to think that I may actually get to see end-game content and with Jason no less!!! wOOt!!.
Posted by Tracy Talbot at 12/21/2008